Some Parish news and events

First Holy Communion 2020 ***Entry to the programme has now closed***

The course is for children in Y3-6. Each child will need to buy an “I Belong” book, available from the repository (£8.50).Application forms are available at the back of the church, via St Mary’s School and on the parish website.

The first session for children is on Monday 13th January, and the next parents’ meeting is on Wednesday 15th January, 7.30pm in St Mary’s Church.

Report: Dementia Friend Information afternoon and Audit
We had a very informative session with Dementia Friends Champion Fiona Bell. We intend to run these sessions every 6 months to help parishioners understand life with 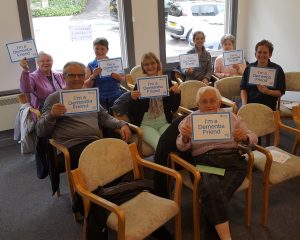 dementia, and to support carers. Thank you to Roberta for providing the great cake.

Two groups took on the audit of our buildings and of our church services. This was to assess what we are doing and what we could do to make the buildings and services more welcoming to parishioners with dementia and their carers. Look out for suggestions in the bulletin of how we can help, and for facts about what dementia is and is not.
*Look out for parishioners wearing Dementia Friend forget-me-not badges at Mass.

Faith in Action is a national Catholic award for young people. The Clifton Diocese is piloting the scheme with young people in different parishes across the diocese. Aim: to explore how the awards could run in every parish, acknowledging & encouraging the service and presence of young people. The awards enable young people to reflect on their role in the Church, deepen their understanding of scripture & Catholic Social Teaching, and grow in their faith. Info: youth@cliftondiocese.com or visit www.cliftondiocese.com and search for Faith in Action.

Two of our parishioners attended the Adoremus conference: Adoremus-National-Eucharistic-Pilgrimage

On Saturday 18 January we welcome David Wells back to the Diocese to help us explore what it means to ‘share our story’. David is well known for his deep theology, accessible presentation and self-deprecating humour. He will inspire us, nourish us and encourage us to keep sharing. In addition to his two talks, there will be a range of workshops on offer which will help new and experienced catechists and evangelists to engage more deeply with their role and mission. These will include: First Communion Preparation, Accompanying parents, Confirmation catechesis, Sharing our Story – Alpha, Baptismal Preparation, Liturgy and Catechesis and Sacramental Rites.

All are welcome to this day at St Brendan’s College, Brislington, Bristol – no experience necessary.

The day starts at 10am (with refreshments from 9.30am) and will finish 3.30pm, please bring a packed lunch.

Timetable for the day

Dave Wheat – SHARING OUR STORY – Accompanying young people on their journey of faith. This workshop will explore how sharing our own stories of faith can support and accompany young people, especially during formation for Confirmation and beyond. It will also highlight opportunities for our parishes to engage in the Faith in Action award, enriching their ministry to young people.

Jackie Bailey and Katherine Wadley  – WITH YOU ALWAYS–BAPTISM FOR LIFE – Jackie & Katherine will share this Baptism Preparation course, a programme published by the Archdiocese of Liverpool.  They have been running this in their parish for the past 4 years and will be talking about the ideas behind the programme, the practicalities of how it was set up and is currently run. They will finish with a taster of the course itself.

BRAVE AND COURAGEOUS – running courses in the parish! A practical and engaging session sharing information on latest resources, keys for success, and uplifting stories from the parishes.

SHARING FAITH WITH FRIENDS AND FAMILY – Together, identify some of the barriers and practice some proven ways to overcome them. Come with open hearts and minds!

Joanne White – ENABLING PARENTS TO SUPPORT THEIR CHILDREN’S FAITH. Joanne is the Marriage and Family Life Co-ordinator for Cardiff Diocese. She will be presenting a workshop on how we enable parents to support the faith life of their children.

Doreen Wyatt – LITURGY AND CATECHESIS. Doreen’s workshop will explore the relationship between liturgy and catechesis and how that has an effect on the way we live our lives as Catholic Christians.

Fr. Tom Smith – ALPHA. Fr Tom and parishioners will focus on how to run Alpha in a parish and what it has meant for their parish. If you would like to find out more come and join Fr Tom’s workshop, you will be most welcome.

Carla Crespo – HOW DO WE CAPTIVATE CHILDREN TO THE LOVE OF JESUS IN A WORLD FULL OF DISTRACTIONS? Carla will introduce participants to how she plans her sessions, structures them and how she tries to engage all the children they have fun and enjoy it while they get closer to Jesus. 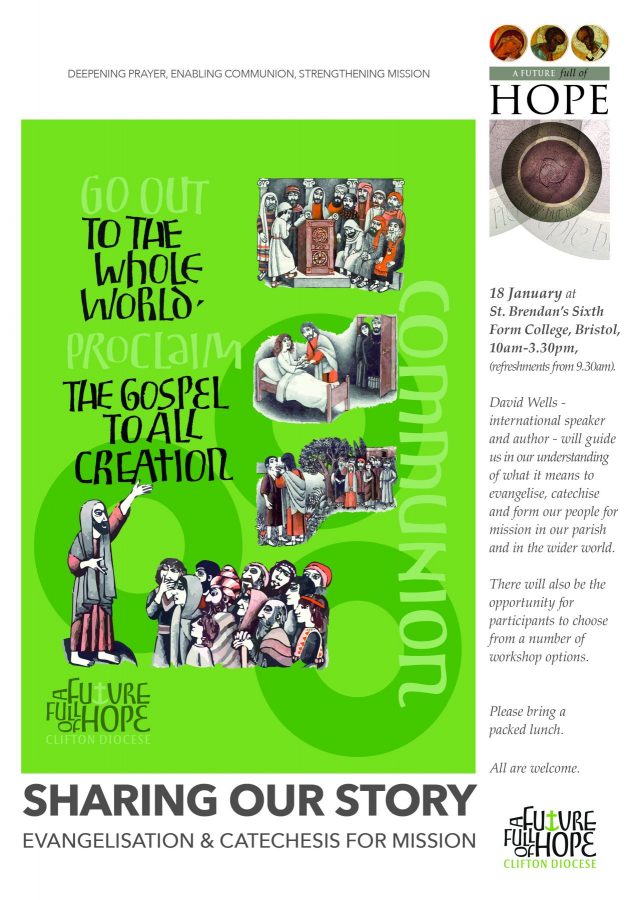 “Praying the Gospel with Lectio,

Monday 20th January at 3 PM, finishing at 4 PM with coffee/tea at 2.45 in St. John’s Lower Ground Floor rooms. We are a small, friendly & gentle group that use a  “Lectio Divina” method to ponder the Gospel for the following Sunday. We anticipate developing a deeper understanding of the Bible Reading; this will help build our prayer life with God. We are delighted to welcome anyone especially those who have not tried this method previously.  For info. call Patrick:07966 366731 or Graham: 07889 495419. (The rooms are at the bottom of the stairs to the lower car park.) ” 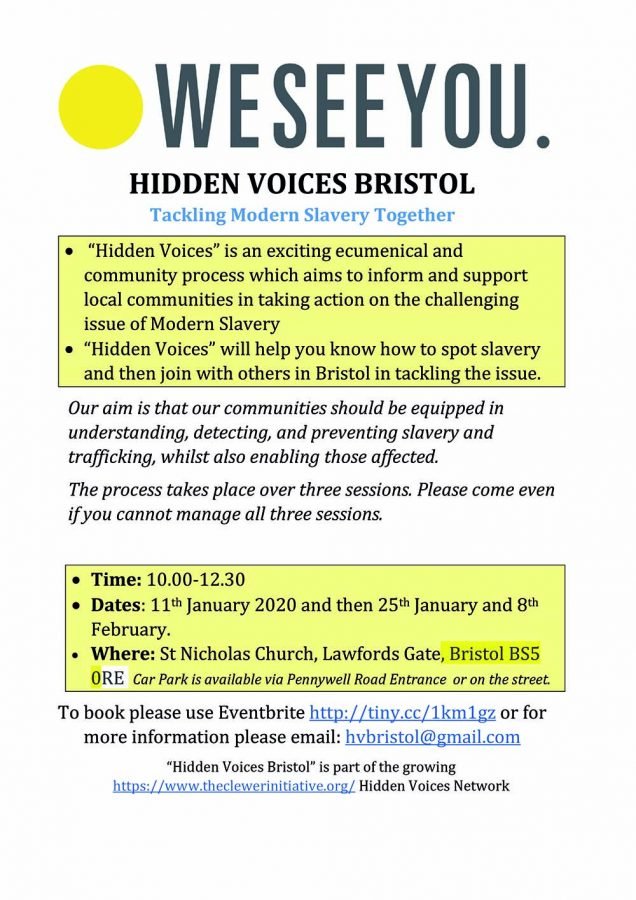 ‘Stand Together’ – Remembering the Holocaust

In January, one of the deadliest and most vicious acts in modern history perpetrated on the human race will be remembered at a special ceremony in Bath. Bath & North East Somerset’s annual event to remember victims of the genocides and Holocaust will be held on International Holocaust Memorial Day 2020, Monday January 27th, 5.30pm at the Guildhall, High Street, Bath (BA1 5AW). This secular event is open to all people.

Stand Together is the theme for the 2020 commemorations, which are coordinated nationally by the Holocaust Memorial Day Trust.

This year’s district-wide HMD event is being organised by Bath & North East Somerset Council in partnership with Bath Interfaith Group.

“Every year on the anniversary of the liberation of Auschwitz extermination camp we remember the 6 million Jewish children, women and men murdered by the genocidal Nazi regime.

This year’s theme, ‘Stand Together’ explores how genocidal regimes throughout history have deliberately fractured societies by marginalising certain groups, and how these tactics can be challenged by individuals standing together with their neighbours, and speaking out against oppression.

Today there is increasing division in communities across the UK and the world. Now more than ever, we need to stand together with others in order to stop division and the spread of identity-based hostility in our society.”

In the years leading up to the Holocaust, Nazi policies and propaganda deliberately encouraged divisions within German society – urging Aryan Germans to keep themselves separate from their Jewish neighbours. The Holocaust, the Nazi persecution of other groups, and each subsequent genocide, were enabled by ordinary citizens not standing with their targeted neighbours.

During Nazi rule and invasion of other European countries, along with millions of Jews, other groups of people were targeted, captured and killed such as disabled people, black people, gay people, gypsies, liberals, Jehovah’s Witnesses, Poles and  Soviets.

The guest speaker at this year’s commemorative event is a Holocaust Survivor. Friedel Hollis, who now lives in Bath, fled Nazi Germany as a child and found refuge in the UK. She will share her memories, speak about her experiences and encourage us all to ‘stand together’ in the face of modern day hate and division.

Sarah Bevan, the daughter of a Holocaust Survivor and member of the local council, said:

“We’re grateful to Friedel Hollis for accepting the invitation to speak at this very poignant event, which is being marked on the same day all over the world.

I know the council takes pride in working with a cross-section of groups and individuals across the local authority to break down barriers and build cohesive communities.

The terrible events of the Holocaust and other genocides including those in Bosnia and Rwanda should never be forgotten. It’s essential to learn from the past so the same mistakes aren’t made again.”.

The Bath Interfaith Group celebrate their 30th anniversary in 2020. www.facebook.com/bathinterfaith

What does the Bible say about LGBT+ issues? Sat 1st February

What does the Bible say about LGBT+ issues?

Most of us have been brought up and taught that the Bible and therefore the Church condemns any sexual orientation other than heterosexual. But is this the whole truth? Come and bring your questions and concerns to this Day Workshop exploring seriously what the Bible says about the LGBT+ issues.

Led by the theologian Jayme R Reeves, it begins at 9.00 for 9.30am and concludes at 4.00pm on Saturday 1st February at St Nicholas of Tolentino Church, Lawfords Gate, Bristol BS5 0RE (parking in church car park on Pennywell Road).

Refreshments and lunch will be provided (so registration is essential please!). Contact for information or registration email: inclusionforall@cliftondiocese.com or the parish office on 0117-909-0419.

Thurs 20th Feb 2020 NEW HORIZONS WALK  A short walk starting in St Mary’s church car park at 10.30 will take place for those who have been bereaved. We shall walk around Victoria Park and stop for refreshments in the Pavilion café.  Please feel free to bring a friend.

For the past 50 years Worldwide Marriage Encounter has been offering marriage enrichment retreats all around the world. Focused on couples who want to enrich their relationship and gain a deeper understanding of the Sacrament of Marriage, the retreat offers a unique experience. It’s a chance to explore your relationship at a deeper, more intimate level, regardless of how long you have been together. Thousands of couples in the UK have benefited from a Marriage Encounter weekend retreat, the next retreat is 6th – 8th March in Swindon, why not find out more at wwme.org.uk

At a time when change is often feared, stability can be elusive, and busyness interferes with listening to God, this quiet day offers an opportunity for space and reflection.

The day will be led by Richard Frost, Anglican Reader (lay minister), Benedictine Oblate (lay member of a monastic community) and author of Life with St Benedict published by BRF. Richard also writes a blog at workrestpray.com.

There will be 3 short talks and periods of silence together with guidance on how to use the day. Reflecting Benedictine spirituality, the day takes the principles of three monastic vows: obedience (listening to God), conversion of life (change) and stability to explore how people can relate those principles to their faith, work and other aspects of life in very practical ways.

The day is open to anyone. No prior knowledge of monasticism is needed!

Please book a place (a donation to cover costs will be requested) by contacting Richard directly at richardnfrost@outlook.com or 01626 870288.

SCRIPTURE: A short series exploring St Matthew’s Gospel at Emmaus House, Sleep Lane, Whitchurch, Bristol. As we read St Matthew liturgically, John Huntriss will deepen our understanding of the Jesus we encounter in St Matthew’s Gospel. This short time together will invite participants to familiarise themselves with Matthew’s Gospel as they journey through the liturgical year. Details are on the notice board.
Mon 4th Nov Introducing St Matthew, the Evangelist
Wed 27th Nov Matthew’s Infancy Narrative
Wed 25th March – Matthew’s Passion & Resurrection Narratives
Wed 6th May – The healing & teaching / Ministry in Matthew
All sessions 7.30pm-9pm

Mon 9th Dec Praying the Gospel with Lectio,
3-4pm with coffee/tea at 2.45pm in St. John’s Lower Ground Floor rooms. We are a small, friendly & gentle group who use a “Lectio Divina” method to ponder the Gospel for the following Sunday. We anticipate developing a deeper understanding of the Bible Reading; this will help build our prayer life with God. We are delighted to welcome anyone especially those who have not tried this method previously. For info: Patrick 07966 366731 or Graham 07889 495419. (The rooms are at the bottom of the stairs to the lower car park.)